Events in Uzbekistan are becoming suspiciously similar to the start of the Kazakh protests in January. Satisfaction of demands in Karakalpakstan did not stop the riots in Nukus that broke out on July 2, which were fueled by activists from neighboring areas. At the same time, it became known that the initiative to deprive the Karakalpak region of sovereignty came from … regional deputies. Apparently, the true cause of the events must be sought in a different plane, and in the protest itself, the interests of different forces must be sought. 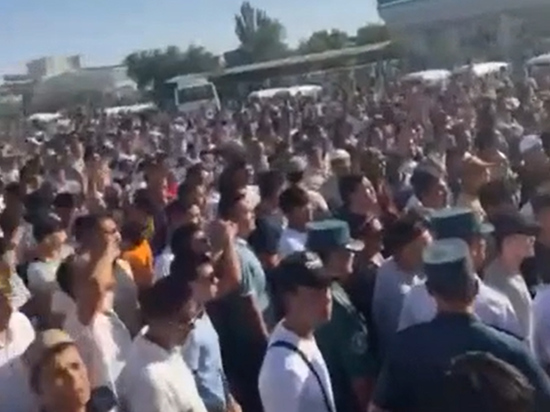 The riots in Nukus ended with a forceful dispersal and the introduction of a state of emergency in the region. According to the country's Prosecutor General's Office, during clashes between protesters and police, 18 activists were killed and 243 were injured. 516 people were detained, some of them have already been released. It was not possible to kindle a mass protest, as happened six months ago in Kazakhstan, but the situation around Nukus is increasingly beginning to resemble the Kazakh scenario.

While the Uzbek president tried to resolve the situation on July 2 by removing the cause of the protest, a new batch of protesters from northern Karakalpak regions arrived in Nukus. After that, a phase of bloody clashes with the Uzbek security forces began. 50 members of the National Guard were attacked by three hundred activists who took away their special equipment and uniforms – walkie-talkies, batons, helmets, stun grenades and shields. In response, law enforcement officers used weapons and tear gas.

It seems that a crowd of activists was sent to the city on purpose to prevent the fire of protest from dying out prematurely after the decision of President Mirziyoyev to preserve the sovereignty of Karakalpakstan.

As you know, the January protests in Kazakhstan began due to rising gas prices in the Mangistau region and continued on a larger scale when the authorities agreed to the demands and lowered prices. In Uzbekistan, the problem of the status of the Karakalpak region also looks like just an excuse thrown up by regional deputies to unleash a wave of destabilization in the Central Asian region.

“MK” spoke about the events in Karakalpakstan with the head of the department for Central Asia and Kazakhstan of the Institute of CIS Countries Andrey Grozin:

– It has already been announced that among the detainees there are people who were involved in Kazakhstan during the well-known events, and before that in the protests in Belarus. I personally cannot interpret the words of the President of Uzbekistan in a different way, except that “professional revolutionaries” were at the head of the rebellion. An investigation team is already working on the detainees.

The Uzbek security forces have their own experience in this sense. Suffice it to recall the Andijan events, when even under Karimov there was an attempted armed rebellion in Andijan, suppressed much more severely than in Nukus.

The influence of external forces was noted by Tashkent. Although it is not called who specifically started it, it is known whose hefty ears stick out due to the events of the “Arab Spring”. Which, in turn, was a prelude to the rebellions that are now trying to organize in Kazakhstan, Uzbekistan, and now, apparently, Kyrgyzstan is next in line.

– Of course. In order to successfully organize a “color coup”, you need to work in the “field” for a long time, through the study of various aspects of social life in certain regions of the “target country”. Long-term work with local leadership is also organized. This also applies to the security forces, and the same local parliamentarians. Gradually, a climate is being created in which the coup attempt can be successfully carried out.

In Kazakhstan, this was done quite brutally, “on the knee”, but in Uzbekistan, the study of the problems of the Karakalpak ethnos is a long-term strategy implemented by various think tanks, primarily Anglo-Saxon ones. This has been happening purposefully since the mid-1990s. Grant programs are allocated for quite plausible research, like the need for water supply in certain areas. There is also a growing of youth leaders for business and start-ups.

If you look closely at the biographies of the same parliamentarians, you will find out a lot of interesting points related, for example, to their contacts with non-Uzbek research centers. We can also note all sorts of inter-parliamentary exchanges. All this information will not be fully communicated to the public, but the leadership of Uzbekistan is already drawing its conclusions.

– Uzbekistan, like Kazakhstan, is not immune from the repetition of such events. For example, those who were arrested are not even the organizers, but rather “foremen” who have been trained in organizing mass riots and directing the crowd to the targets necessary for the organizers.

“Why didn't you call?”: the president of Uzbekistan smashed the deputies of Karakalpakstan

Watch the video on the topic