The UK has recorded 106,122 new Covid-19 cases in a 24-hour period. The figure marks the first time daily case numbers have exceeded 100,000 in the UK, and is the highest registered by British officials since the pandemic began.

On Wednesday, the UK government’s Covid-19 dashboard showed that a staggering 106,122 new infections were registered on Tuesday, around 13,000 more than the previous high of 93,045, which was registered on December 17. 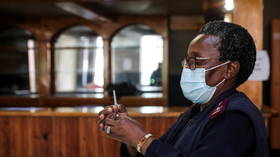 A total of 643,219 infections have been registered in the past seven days around the country, up 58.9% from the previous week.

Wednesday’s data was accompanied by the news that a further 140 people had lost their lives to the virus. Hospitalizations due to Covid are increasing, but at considerably slower rates than the growth being seen in infections.

The UK also broke another domestic record, according to Wednesday’s data, with more than one million vaccine doses administered in 24 hours for the first time. Approximately 1.06 million shots were rolled out on Tuesday, some 968,665 of which were booster jabs. The British government has put booster shots at the forefront of a national campaign to tackle the more contagious Omicron variant of Covid-19.