UK Prime Minister Boris Johnson’s woes grew on Monday, as new figures show his approval rating has declined to its lowest level since he took office, with most Britons expecting him to resign or be forced out in the near future.

An opinion poll released by Ipsos Mori found that six out of 10 respondents believe Johnson would not be prime minister by the end of 2022. The poll comes in the wake of a wave of allegations that a number of Conservative Party ministers and their staff – including Johnson and his office – had breached lockdown restrictions last year.

Meanwhile, a separate YouGov tracker poll has shown that the prime minister’s approval rating has fallen to its lowest level, 29%, since he entered Downing Street in 2019. Some 64% of respondents said they felt he was doing “badly” as PM. 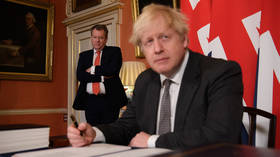 Britain’s Brexit defender is gone, and the EU can now swoop in

The latest figures mark a steep decline in support for the Conservative leader, who, in April 2020, secured a record-high approval rating of 66% as he worked to combat the Covid pandemic.

The findings also come a day after The Guardian published a photo purportedly showing Johnson, his wife, and 17 Downing Street staff members violating the government’s own rules during the first lockdown in May 2020. Downing Street has defended the image, claiming it shows a “work meeting.” despite bottles of wine and a cheese board being visible.

This is the latest alleged infringement of the rules to rock the government, with an investigation already underway into reports a number of parties were held in violation of Covid restrictions during November and December 2020.

Cabinet Secretary Simon Case, who was leading the probe into the alleged parties, was forced to step aside last week after it was claimed he was aware of or attended two gatherings at his own office in December last year. Senior civil servant Sue Gray has taken over the investigation.