Academics hoping for promotion at University College London (UCL) reportedly have to limit the number of “dead white men” in their courses, under a scheme to “liberate” the curriculum from its “Eurocentric, male-dominated” focus.

An internal guidance document, titled UCL Academic Careers Framework, lists engaging with the university’s ‘Liberating the Curriculum’ (LTC) initiative as a core requirement for those seeking lecturer roles, according to The Telegraph, and has caused one professor there to anonymously describe it as approaching zealotry. 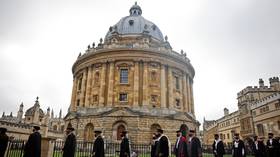 When applying for a promotion, candidates are apparently expected to “demonstrate the impact” of the initiative and then offer up an “indicator of impact” such as incorporating new material or making “substantial” revisions to old modules, while also accounting for student feedback.

According to UCL, the initiative is aimed at creating an “inclusive curriculum” that “[challenges] traditional Eurocentric, male dominated curricula” and “[ensures] the work of marginalized scholars on race, sexuality, gender and disability are fairly represented in curricula.”

The LTC working group of staff and students claims that several academic disciplines are “deeply exclusive and unfair” since they are “overly represented” by “dead white (able-bodied European) men.” The initiative also calls on professors to “be the change” and to “check their privilege.”

“I think this whole woke avalanche is really concerning because it is like a religious fervour,” an unnamed professor troubled by the LTC told The Telegraph.

Instead of looking at the evidence, it says some answers have got to be accepted and others cannot be accepted. That is poisonous – it is the wrong direction for a university to go in.

But a UCL spokesperson told the paper that the document is not a “checklist for promotion” and only offers “illustrative examples” of recommended actions. They added that a candidate would not be “expected to meet all of the criteria highlighted” in the guidance, but would instead be judged on the “evidenced impact and reach” of their work.

However, the paper also noted that the Free Speech Union has written to UCL’s leadership, urging its vice-chancellor to remove the requirement to adhere to the initiative immediately. The union’s general secretary, Toby Young, described the conditions for promotion as an “infringement of [the] right to free speech and almost certainly unlawful.”