Former Brexit minister David Frost, who quit his job last week, has said his decision to leave the government wasn’t because of Prime Minister Boris Johnson’s leadership but an inability to support Covid-19 restrictions.

Speaking to reporters outside his home on Monday, Lord Frost said that Boris Johnson had some difficult decisions ahead of him. 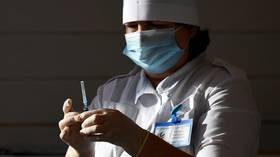 Kremlin lashes out at ‘dangerous fools’

The former minister said his decision to resign was not based on Johnson’s leadership but was about being unable to support his coercive policies on Covid-19.

“This is absolutely not about leadership. This is about policy differences,” Frost stated, adding, “I left the government because, as I think is well known, I couldn’t support certain policies – most recently on the Covid restrictions.”

He reiterated that he had intended to resign in the new year, but the decision had been brought forward. He had earlier noted that he wished to resign weeks ago but Johnson had persuaded him to stay on until January.

Frost said that he had the greatest of admiration for the prime minister, who has recently seen his popularity hit by a 2020 Christmas party scandal in which he is alleged to have taken part in activities that broke his own Covid rules.

It was announced on Sunday that Foreign Secretary Liz Truss will replace Lord Frost as the UK’s chief negotiator in post-Brexit talks with the EU.