Archaeologists have unearthed the “near-pristine” remains of five Ice Age mammoths while excavating a newly discovered 200,000-year-old graveyard in the UK. Tools perhaps used by Neanderthals to hunt the animals were also found.

The remains, including those of two adults, two juveniles, and an infant, belong to a species of Steppe mammoth, an ancestor of the Woolly mammoth. More bones are expected to be uncovered as digging continues at the vast site, a gravel quarry in the Cotswolds area near the town of Swindon.

Researchers estimate the mammoth remains and stone tools to be around 220,000 years old. The site is thought to have once been a fertile plain to which both animals and Neanderthals were drawn as temperatures fell.

Ranking the find among the “most important discoveries in British palaeontology,” evolutionary biologist Ben Garrod told The Observer that finding such well-preserved skeletons was “incredibly rare.” He said the Steppe mammoths were the largest of the species, once weighing as much as 15 tons – about two to three times the weight of an African elephant.

It’s a glimpse back in time. That’s incredibly important in terms of us understanding how climate change especially impacts environments, ecosystems and species. 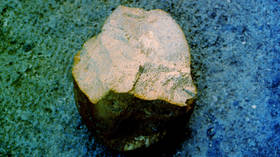 Excavation at the site began in 2019 after two amateur fossil hunters spotted the remains and a Neanderthal ax in 2017 and alerted archaeology group DigVentures. The team has since recovered bones including tusks, leg bones, ribs, and vertebrae – some of which show evidence of possible butchery marks. Flint tools thought to have been used to clean fresh hides were also found.

“Archaeological sites from this period are rare, and critical for understanding Neanderthal behaviour across Britain and Europe. Why did so many mammoths die here? Could Neanderthals have killed them? What can they tell us about life in ice-age Britain? The range of evidence at this site gives us a unique chance to address these questions,” Lisa Westcott Wilkins of DigVentures told The Observer.

Other discoveries at the site include giant elks – twice the size of the animals today – with 10-foot-wide antlers, dung beetles, which used animal droppings for food and shelter, and freshwater snails. Seeds, pollen, and fossils belonging to extinct plants have also been uncovered.