London’s mayor has said he sees no way to avoid more Covid restrictions in the British capital amid a spike in Omicron infections, fearing without them the NHS would be brought to the brink of collapse.

In an interview with the BBC on Sunday, Sadiq Khan described new restrictions as “inevitable” and called for a “major package of financial support for our hospitality, culture, and retail [sectors]” for when that happens. He argued that if the authorities failed to bring in tougher restrictions “sooner rather than later,” the capital would see an even worse surge in positive cases and “potentially public services like the NHS on the verge of collapse, if not collapsing.” 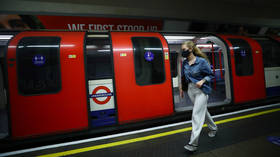 The London mayor said that in the British capital alone, nearly 30,000 new Covid cases have been recorded over the past 24 hours.

Khan’s comments come less than 24 hours after he declared a “major incident” in London amid rising numbers of Covid cases and the rapid spread of the Omicron strain in particular, which has already become a dominant variant in England and Scotland, supplanting Delta.

The term ‘major incident’ is used for events that require special arrangements on the part of emergency services, the NHS or city authorities, and which are “likely to involve serious harm, damage, disruption or risk to human life or welfare, essential services, the environment or national security.”

Khan said 1,534 people were currently hospitalized with Covid in the capital — a nearly 30% rise compared to last week.

When announcing the decision on Saturday, Khan pointed out that the “vast majority” of patients being treated in hospitals have not been inoculated. He urged Londoners to get vaccinated and receive a booster dose, particularly extending the call to some minority groups.

Khan promised more venues in the capital would begin offering initial doses and boosters in the coming days. So far, 2.7 million Londoners have received a booster, according to government figures.