Frost’s departure was reported by the Mail on Sunday, citing sources within the government. The minister, who negotiated Britain’s departure from the European Union, reportedly handed in his resignation a week ago, but was persuaded to stay on until January. 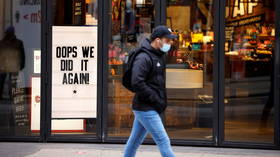 Frost’s resignation was prompted by his growing “disillusionment” with Johnson’s government, the Mail reported. Specifically, he disagreed with the introduction of ‘Plan B’ coronavirus restrictions, income tax hikes announced in September, and the high cost of Johnson’s plan to lower carbon emissions to net zero by 2050.

Of these gripes, the ‘Plan B’ restrictions have been the most contentious for Johnson. Introduced earlier this month, the suite of measures includes a mask mandate for indoor venues, vaccine passes for nightclubs and large events, and daily testing for the close contacts of infected people.

The restrictions, which reports suggest that Johnson will soon be asked by ministers to expand into a full lockdown, have caused discontent even within Johnson’s own party, with 100 Conservative MPs refusing to vote on bringing in the vaccine pass system. Forty of these MPs voted against mandatory masking too.

The introduction of these measures was followed by a devastating loss for the Conservative Party at the ballot box. While the Tories had held the constituency of North Shropshire for nearly 200 years, Liberal Democrat Helen Morgan beat the Conservarive Neil Shastri-Hurst by nearly 6,000 votes in a by-election there on Thursday.

Public anger against Johnson stems not just from the introduction of new restrictions, but also from the revelation that staff at Downing Street and a number of other locations held Christmas parties last year, while ordinary Britons were forbidden from gathering. The cabinet minister assigned to investigate these events, Simon Case, resigned on Friday after it emerged that he too held a party in his office.

Frost has not publicly commented on his apparent resignation yet. As of late, Frost had been locked into negotiations with European Commission Vice President Maros Sefcovic on post-Brexit arrangements between the UK and EU.