Anti-vaxxers have clashed with police during a demonstration against anti-Covid measures in central London as officials admit they are “extremely worried” about the epidemiological situation in the UK capital.

Its participants are protesting the vaccine mandate for NHS staff, the recent introduction of Covid-passports, and other pandemic-related measures. None of them are wearing masks or keeping social distance, with many holding banners against ‘medical apartheid’ and ‘tyranny’, along with hippie-style ‘Love wins’.

There have been some scuffles between demonstrators and law enforcement officers though generally the protest appears to be peaceful. 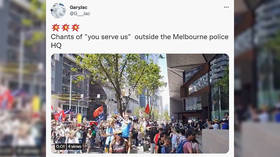 Meanwhile, the Mayor of London Sadiq Khan said earlier on Saturday that he was “extremely worried” about the speed of the spread of the new Covid variant Omicron, which is now dominant in the capital. He told reporters that growing numbers in cases are leading “to big issues in relation to staff absences and the ability of our public services to run at the optimal levels.”

The UK has registered record numbers of Covid-19 cases three days in a row with more than 93,000 recorded on Friday. Such figures have reportedly prompted the UK government to consider imposing a new two-week lockdown after Christmas.