Oxford University’s race equality task force has reportedly published recommendations that could see academics judged and hired based on what’s been described by one professor as a “woke score.”

The proposals are aimed at raising the number of hires from ethnic minority backgrounds, according to The Telegraph, which reviewed the task force’s consultation document. The equality panel reportedly noted that it was “important to embed EDI [equality, diversity and inclusion]” into “all recruitment.”

A “centrally funded pool of trained EDI observers” should be set up to “provide support” to recruitment panels on request, the document says. The task force also called for “good citizenship and/or commitment to EDI work” to be “essential criteria” during reward and recognition processes. 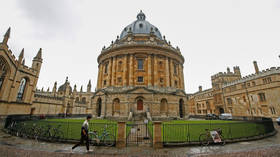 According to The Telegraph, students and staff have been asked to submit responses to the consultation by next Wednesday. Following this, the task force will create a strategy on equality and diversity that will be submitted to Oxford’s governing council for approval before it becomes official policy.

However, the paper reported that the proposals have drawn flak from senior academics at the university who worry that qualified candidates will be “[marked] down because they haven’t jumped on the woke bandwagon.”

“If we are supposed to pay attention to their EDI – their woke score – does this mean it doesn’t matter if they are useless at teaching and research? Or do you now have to get a minimum woke score to get a job?” an unnamed senior professor told The Telegraph.

The academic said one of the recommended ways to “tease out” a candidate’s views on diversity was to ask them for examples of how they had “called out these kinds of issues in [their] previous appointment.”

So you are being interviewed for a job in alchemy, yet you have to go out your way to show you have tried to virtue signal – to an old codger like me it just seems crazy.

An Oxford University spokesman said the document was not yet official policy, noting that a “detailed strategy” on the recommendations could come by the end of the academic year.

Other suggestions include a cross-faculty program of “inclusive teaching, curriculum diversification and decolonising activities” and training students and academics to “better understand microaggressions and stereotypes.”