British Cabinet Secretary Simon Case will no longer investigate a series of alleged lockdown-breaching Christmas parties at Downing Street, after it emerged that a festive gathering was held in his office over the same period.

Case had been investigating a number of alleged festive gatherings held last winter at Prime Minister Boris Johnson’s Downing Street office, as well as a party at the Department of Education. These events, at least one of which was attended by Johnson himself, reportedly took place in breach of the government’s own coronavirus restrictions. 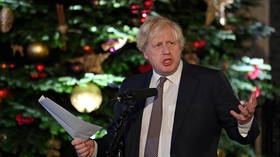 However, Case stepped down on Friday after it was revealed that a lockdown-defying party was held in his own office on December 17 last year. First reported by the Guido Fawkes gossip blog, the party was attended by around 15 people. Invites were sent out and the event featured “copious booze and music.”

“To ensure the ongoing investigation retains public confidence, the cabinet secretary has recused himself for the remainder of the process,” read a statement from Downing Street on Friday.

A government spokesperson downplayed the party, describing the event as a “virtual quiz” attended by half a dozen staffers in person in the cabinet secretary’s private office, but in which Case played no part. However, they said he walked past partiers on the way out of the building, indicating he was at least aware of the event at the time.

“No outside guests or other staff were invited or present. This lasted for an hour and drinks and snacks were bought by those attending. He also spoke briefly to staff in the office before leaving,” the spokesperson told the BBC.

The investigation will be taken over by senior civil servant Sue Gray. Gray ran the 2012 ‘Plebgate’ inquiry that led to the resignation of minister Andrew Mitchell, oversaw several cabinet reshuffles, and investigated MP Damian Green for sexual harassment in 2017.

Opposition MPs were scathing in their criticism of the turn of events on Friday. “Boris Johnson as prime minister has set the tone for the civil service and the rest of government,” said Labour Party deputy leader Angela Rayner. “With each new revelation there is growing evidence of a culture of turning a blind eye to the rules.”

Ian Blackford, the Scottish National Party’s leader in Westminster, was more succinct. “This is a government that stinks of corruption and stinks of sleaze,” he told the BBC.