One of the most affluent men in Britain has been accused of excessive greed after he allegedly demanded annual rent of £600,000 for allowing a new train line to cross his land.

Ralph Percy, 12th Duke of Northumberland, owns land which will be crossed by the new Northumberland Line to service deprived communities – but that allegedly has not stopped the multi-millionaire from demanding eye-watering rent.

Under ancient ‘wayleave’ rules, landowners can allow access to their land for remuneration, including through annual rent as one of the options. Percy is reportedly worth £315 million and owns, among other assets, Alnwick Castle, featured in the ‘Harry Potter’ movies. 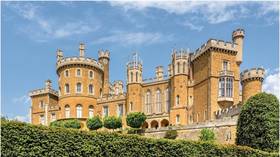 A lawyer representing Northumberland County Council, Richard Turney, told a public inquiry in Blyth that wayleave rent provisions are “archaic” and related to “the original primary purpose of the railway, to serve coal mines.”

“This has culminated in the Duke of Northumberland twice threatening to terminate the wayleaves in a dispute over rent, including after this application was made, with an extraordinary demand for more than £600,000 in rent,” Turney said, according to the BBC’s Local Democracy Service.

The lawyer said the “stranglehold over public resources” is “inappropriate.”

Responding to Turney’s comments, a representative for Northumberland Estates, the company that manages the duke’s vast lands, told the media that it “strongly refutes the allegations” and “wholeheartedly” wishes success for the project.

The spokesperson claimed that the controversy is actually related to another “separate and a long running” dispute with Network Rail, who “are attempting to claim private property rights without appropriate consultation and compensation.”

The response did not seem to assuage the anger of local residents hoping to benefit from the new railway line. One Blyth resident told The Mirror that Percy “is already nicknamed ‘Scrooge McDuke’ by people around here and you can see why.”

The outcome of the inquiry, which was completed in early December, will be known in 2022, with the report due to be sent to the government for consideration.