Welsh First Minister Mark Drakeford has warned that the nation is facing an oncoming “storm of Omicron,” as he unveils a string of Covid restrictions in a bid to combat rising case numbers.

From December 26, Wales will shut nightclubs and reintroduce social distancing in shops and workplaces. Unveiling the stricter measures, Drakeford did not rule out going further after Christmas, imposing restrictions on households and bringing back limits on the hospitality sector.

Speaking to the BBC’s ‘Today’ program on Friday, the nation’s first minister warned that “Wales is in the calm before the storm.”

We see the storm of Omicron coming our way and we need to prepare for it now.

Acknowledging that Christmas is a “special” time of year for people, Drakeford said his administration was seeking to act in a “proportionate and fair” manner, urging citizens to act sensibly during the festive period. 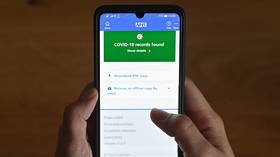 While not seeking to limit social gatherings over Christmas, the Welsh First Minister did recommend people temporarily avoid meeting “wider circles of friends” and hold smaller festive gatherings than usual.

The announcement from the Welsh leader comes after the UK reported a record number of Covid infections for the second day in a row, with 88,376 cases confirmed on Thursday.

While Wales has lower Omicron figures than elsewhere in the UK, with only 95 confirmed infections of the new variant, the regional public health agency fears it could see a “rapid increase over the coming days and weeks.”