UK Prime Minister Boris Johnson’s Conservative Party lost a by-election on Thursday in an area it firmly held for almost 200 years. The Tory government has been marred by a lobbying scandal and an internal revolt. 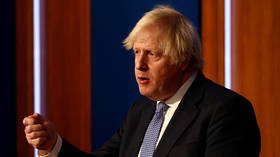 The result is a stunning upset for the Conservatives, who had represented North Shropshire in Parliament for the past 189 years, with the exception of the short period between 1904 and 1906, according to UK media. The party comfortably won the constituency in 2019, leading with a nearly 23,000-vote majority.

“Tonight, the people of North Shropshire have spoken on behalf of the British people,” Morgan said after the vote. “They have said loudly and clearly: Boris Johnson, the party is over.”

“Our country is crying out for leadership. Mr Johnson, you are no leader,” Morgan added.

The by-election was held after veteran MP Owen Paterson gave up his seat due to a lobbying scandal.

The defeat in North Shropshire, previously considered to be a safe Tory bastion, could be a sign of future electoral losses for Johnson’s party. The PM currently faces a revolt in Parliament, where nearly 100 Tories broke ranks this week and voted against the government’s proposal to introduce Covid passes for certain venues and events in England.