The Royal College of Emergency Medicine has warned that the UK’s National Health Service is facing an “acute” staffing problem as it seeks to battle the spread of Omicron.

Speaking to BBC Radio on Thursday, the college’s president, Katherine Henderson, raised concerns that “even if we are not seeing a big rise in hospitalizations, [officials are] already seeing the effect on not having the staff to run shifts,” as the virus forces people to self-isolate.

“The acute problem is actually to do with staffing,” Henderson said, adding that medical professionals “are worried about patient harm coming about because we just don’t have the staff,” especially in London.

The warning that medical professionals could struggle to cope comes after the UK reported a record number of new Covid cases on Wednesday, with 78,610 infections marking the highest daily total since the start of the pandemic. 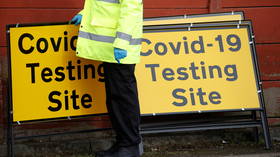 Henderson, who alongside her work at the medical body is an emergency consultant in London, cited how absences of doctors and nurses who are unwell are leaving around a 10% staff shortage that risks hitting their ability to provide care to patients.

The confirmation of staff shortages comes after senior NHS figures warned that illness and self-isolation were beginning to stretch the medical service to its limits, with colleagues forced to cover extra shifts to make up for absences.

Hospitals across England have reportedly been told to discharge as many patients as they possibly can to clear spaces for potential Covid admissions as the Omicron variant spreads throughout the UK and elsewhere.

The concern about the situation across the NHS comes after a medical expert, Professor Sir David Spiegelhalter, told the UK’s Sky News that a million people could be self-isolating in Britain after testing positive for Covid on Christmas Day, given the speed at which the new variant is moving through the country.