England’s chief medical officer, Chris Whitty, has urged Britons to cut down on the number of “less important” social interactions they engage in this festive season given the rapid pace of Omicron’s spread.

Speaking at a press conference with Prime Minister Boris Johnson on Wednesday – the same day the country recorded its highest daily number of new cases since the beginning of the pandemic – Whitty said the Omicron strain is moving at an “absolutely phenomenal pace.”

He also cautioned against assuming that it causes milder infections than other Covid strains, saying it is too early to tell. 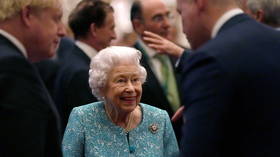 Answering questions from MPs on Thursday, Whitty reiterated that the new variant “is highly transmissible,” and as a consequence, “it is sensible” for people to start choosing which invitations to accept, while rejecting “less important” ones. That will help to reduce the chances of catching Covid and passing it on, he added.

“This is a period to prioritize,” Whitty said.

Examples of this prioritization have come quickly, with Queen Elizabeth II announcing on Thursday the cancelation of the traditional pre-Christmas lunch for her extended family, which was to be held next week.

Following Whitty’s warnings, a number of businesses have called on the government to support them, citing a dramatic increase in cancelation rates as people heed the advice to limit social contacts.

Whitty’s comments were met with criticism on social media, with some taking him to task for becoming ‘political’. Responding on Thursday, Whitty said the role of holders of his post, dating back to the 1850s, has been to provide health advice to the public.

Some critics of the government’s handling of the pandemic consider Whitty something of an adversary. The professor has been publicly harassed, and in July, a man was charged with assault after he and a friend recorded themselves grabbing at Whitty in a London park.