Queen Elizabeth has called off her traditional pre-Christmas family lunch next week as a precaution amid a surge in Covid-19 Omicron cases, according to a palace source.

On Thursday, sources at Buckingham Palace told Reuters that Queen Elizabeth had canceled a pre-Christmas lunch with her family which was due to take place next week. The source said she does not want to put other Christmas arrangements at risk amid the spread of the Omicron variant. 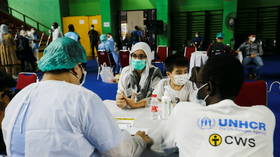 “The pre-Christmas family lunch will not be going ahead,” the source stated, adding that “the decision is a precautionary one as it is felt to put too many people’s Christmas arrangements at risk if it went ahead.”

“While there is regret that it is canceled, there is a belief it is the right thing to do for all,” the source said.

The move comes amid a new wave of Covid-19 infections in the UK, partially driven by the arrival of the Omicron variant which is more contagious – though seemingly less severe – than strains that have gone before.

The monarch was forced to cancel a number of engagements earlier in the year due to recommendations from her physicians. The Queen, 95, is understood to be in good health.