Across England and Wales, official UK figures estimate that only around 50% of the population are using the app. The government’s recently released data suggests the situation is worse than that, as with around 300,000 people testing positive each week, it would be expected that 150,000 people are ‘pinging’ their close contacts via the Test and Trace system. However, figures show that the real number is about half of that.

Similarly, in Scotland, under half of all residents have downloaded the app, with less than 20% of people who have got it using it to inform individuals who have been nearby that they have tested positive. 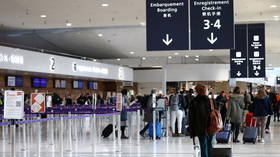 Back in the summer, ahead of what became known as ‘Freedom Day,’ when Covid-19 restrictions were lifted, a poll conducted by Savanta ComRes found that 20% of UK adults admitted they had deleted the app.

The mass deletion came amid the so-called “pingdemic” in July, which saw more than 600,000 people in one week getting told to self-isolate as a result of coming into close contact with an infected person.

The £37 billion Test and Trace system works by alerting individuals who’ve been in close contact with someone who later tests positive, if both people have the app installed on their devices.

It was designed to allow the NHS to swiftly inform individuals who might have been exposed to Covid-19 to self-isolate or get tested to limit the spread of the virus.

The UK Health Security Agency, the nation’s public health protection and infectious disease capability body, has previously urged citizens to use the app, citing it as a vital tool in the fight against the pandemic, allowing officials to prevent thousands of Covid cases from spreading.