A record number of people in the UK might have to spend Christmas Day in isolation this year after contracting Covid-19 due to the fast-spreading Omicron strain, according to the British media, citing government forecasts.

Anyone in the UK who tests positive for Covid-19 from Wednesday onwards will have to spend Christmas Day in isolation under current government regulations. The rules issued by the UK Health Security Agency demand that anyone who gets a positive test goes into quarantine for 10 days. If that person then develops any Covid-19 symptoms during this period, they will have to spend another 10 days in isolation, starting from the day the symptoms first appeared. 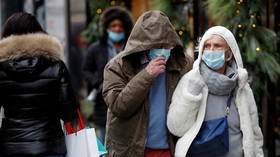 The government believes there might be four times as many people self-isolating this Christmas Day than on December 25, 2020. The total number of Omicron cases reported in the UK rose from 4,713 to 5,346 over the past 24 hours, with 633 new infections linked to the highly transmissible new strain.

The overall number of new daily infections amounted to 59,610 and has gone up by more than 30% in just a week. This is the highest such figure since January, when almost 60,000 new cases were reported. At this rate, the UK may see some 100,000 people infected with Omicron on Christmas Eve, and around one million Brits isolating the next day, media projections say, using the government data.

Omicron appears to be “the most significant threat we have had since the start of the pandemic,” Dr Jenny Harries, CEO of the UK Health Security Agency, told MPs on Wednesday, adding that the time taken for the number of new Omicron infections to double “is shortening.” Earlier, England’s chief medical officer, Professor Chris Whitty, also warned that the new strain is spreading “unbelievably fast.”

The Omicron strain has already become dominant in London where it currently accounts for over 50% of all new cases, according to the British media. It has also caused more than a quarter of all new cases in the east and southeast of England.