The British government is removing all the countries named on England’s pandemic travel red list, Secretary for Transport Grant Shapps has announced.

“From 4am on Wednesday, December 15, all 11 countries will be removed from England’s travel list,” Shapps revealed in a statement posted on Twitter on Tuesday.

He added that all current Covid testing measures for travelers arriving into the country would remain in place, but would be reviewed “in the first week of January.”

Shapps said all travel measures remained subject to review, and the government was prepared to impose new restrictions “should there be a need to do so to protect public health.” 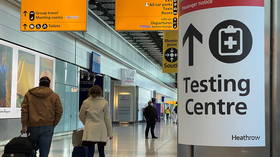 There are growing indications that Omicron – the new Covid-19 variant that has prompted the recent bans and restrictions – is milder than earlier-detected strains.

Health Secretary Sajid Javid told Parliament the decision to clear the red list was taken because the travel ban was not proving to be as effective as had been expected. He said that, given Omicron had “spread so widely across the world,” the red list was now proving “less effective in slowing the incursion of Omicron from abroad.”

The red list announcement came on the same day the government put forward a number of new domestic restrictions for parliamentary approval, including Covid passes for entry into nightclubs and larger venues in England. A number of Conservative MPs – the prime minister’s party – have already indicated they intend to vote against these proposals.