Speaking to Sky News, Raab told host Kay Burley there were a “significant number” of patients in hospital who had been infected with the new Omicron variant of Covid-19, before stating that it was “250 the last time I looked.”

Later in the same hour, he significantly revised that figure downwards from 250 to nine. However, while closer, it was still incorrect.

Health officials were forced to issue a correction on behalf of the government, stating that the exact number presently in hospital with the new variant was 10. 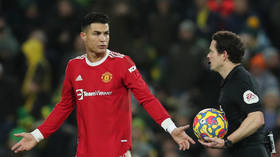 During his first interview, Raab had sought to warn the public that, based on the current rate of transmission, “we will see those numbers increase very dramatically,” claiming that some of those hospitalized “will possibly die or have a very serious suffering.”

He admitted the government didn’t yet “know the full severity” of the new strain, but urged the public to “take action now,” even “if the severity is relatively low.”

On Monday, Health Secretary Sajid Javid confirmed there have so far been 4,713 confirmed cases of Omicron in the UK, and warned that it was set to become the dominant variant in London within the “next 48 hours.”