UK Prime Minister Boris Johnson is under fire over claims a Christmas party was held at Downing Street last year in violation of Covid rules after a video surfaced of government officials joking about the event.

The Conservative party has repeatedly denied holding Christmas events at Downing Street since reports first emerged in the UK’s Mirror newspaper last week. Defending themselves against the claims, the Tories have repeatedly stated that “There was no Christmas party. Covid rules have been followed at all times.”

However, a video released by ITV on Tuesday of a mock televised press briefing has sparked accusations that the government lied about the event. Filmed days after the alleged party took place, government officials joked about “cheese and wine” being served at the event, excusing the lack of social distancing by claiming it was a “business meeting.” 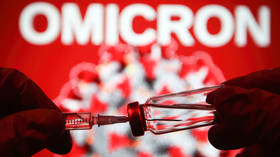 Could Omicron save us from COVID?

The prime minister’s then-press secretary, Allegra Stratton, while laughing at the comments made by Downing Street staff, quickly reminded her colleagues that the test briefing was being “recorded” before suggesting the event in question is a “fictional party.”

Following the release of the video, government ministers pulled out of TV interviews on Wednesday morning. Health Secretary Sajid Javid was set to do the media rounds, speaking to key outlets in the UK about the government’s Covid booster campaign but he withdrew. No one was offered as a replacement, according to the BBC and Sky News.

Responding to the newly released footage at the weekly Prime Minister’s Questions session on Wednesday, Johnson apologized over the clip, accepting the “anger up and down the country” at staff laughing about lockdown measures. While maintaining that “no Covid rules were broken,” the prime minister has said he will direct officials to investigate the situation and assess whether Covid restrictions were violated.