In response to whistleblower allegations, former British foreign secretary Dominic Raab has praised the “Herculean” evacuation from Afghanistan and said the UK was dependent on the US timetable.

Speaking to Sky News’ Kay Burley on Tuesday, Raab hailed the evacuation of British nationals and allied Afghans from Kabul as “an absolutely heroic and Herculean effort.”

“We did everything we could,” he argued, adding that the airlift was “a record that those involved, particularly those working on the ground, should be proud of.”

According to Raab, the Royal Air Force evacuated more than 15,000 people between August 15 and 29, immediately after the sudden fall of Kabul to the Taliban militants, and had flown a total of 17,000 people out of Afghanistan since April.

“That is the biggest evacuation in living memory; the only country that got more people out was the United States,” Raab said.

At the same time, Raab, who now serves as justice secretary and deputy prime minister, said the UK “would have wanted a longer time window in order to get out everyone who was eligible.” He was referring to President Joe Biden’s promise that American troops would leave Afghanistan entirely by August 31. The deadline effectively meant that London had a little over two weeks for the evacuation.

We’ve always said that we were up against this timeline that [was] a combination of the US deadline and the Taliban’s approach to it. We were working to an expedited deadline, and that put pressure on the evacuation.

The Taliban seized Kabul on August 15 and overran the country in a sweeping offensive that coincided with the final stage of the withdrawal of Western forces. The Labour Party criticized the government and Raab personally for what they argued was a rushed and haphazardly organized withdrawal from Afghanistan. Additionally, Raab took flak for vacationing in Greece when Kabul was taken. 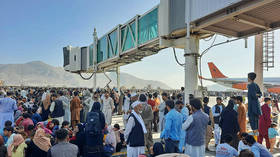 Allegations against Raab resurfaced on Monday, when Raphael Marshall, a former desk officer at the Foreign, Commonwealth and Development Office, said in a statement to MPs that the UK’s response to the takeover of Afghanistan by militants was plagued by bureaucratic chaos and a lack of planning. He said that staffers marked emails as ‘read’ without actually reading them and, in some cases, prioritized evacuating dogs over humans, among other things.

Raab said Marshall’s account of the events was “not accurate,” dismissing him as a “junior desk officer.” He refused to accept the claim that the UK had rescued just 5% of between 75,000 and 150,000 people who applied for help, but acknowledged that officials needed some time for verification and security checks when processing appeals for evacuations.