US drugsmaker Pfizer is denying any wrongdoing after a British TV documentary showed that a presentation made on its behalf had criticized a rival Covid-19 vaccine manufactured by AstraZeneca as being potentially unsafe.

Teasers for a Channel 4 ‘Dispatches’ investigative program, shown on Monday, say a Pfizer presentation described AstraZeneca’s vaccine against Covid-19 as unsafe for patients with compromised immune systems and as having the potential to cause cancer. The speech was delivered in Canada sometime last year, but it was unclear whether it was a one-off event or the speaker had made the claim multiple times. The program, titled ‘Vaccine Wars: The Truth About Pfizer’, airs on Friday.

Pfizer responded to say the presentation had been “wrongly attributed” to it and had been delivered by a third party. 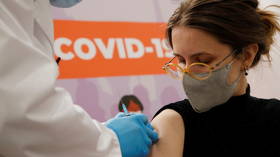 READ MORE: What happened to facts and science? Western propaganda about ‘vaccine disinformation’ is just another Russiagate

“We refute any suggestion that Pfizer has sought to undermine others’ scientific endeavors,” a company spokesman told the Daily Mail. “Our priority has always been getting high-quality, well-tolerated and effective vaccines to patients all over the world as quickly as possible and to help put an end to this deadly pandemic.”

The spokesperson explained that Pfizer had paid a third-party agency to create an educational program about vaccines in Canada, after the government in Ottawa had approved Pfizer’s product for use in the country.

‘Dispatches’ said Pfizer’s manufacturing costs were just 76 pence ($1.01) per jab, but the company was charging the UK government £22 ($29.17) per dose – a 3,000% markup. Pfizer said the estimate was “grossly inaccurate” and did not account for the cost of clinical studies, “manufacturing on a massive scale,” and global distribution.

AstraZeneca, which developed its jab in cooperation with the University of Oxford, has reportedly sold its vaccine at cost for £3.60 ($4.77), losing out on £21 billion ($27.84 billion) in potential revenue, while Pfizer has seen a windfall from the vaccines. However, the AstraZeneca jab has been dogged by reports of potentially fatal blood clots in certain populations, and the UK has since ordered twice as many Pfizer vaccines instead.