Just over a year after the statue of its founder was toppled amid Black Lives Matter (BLM) protests, Colston’s School in Bristol has announced it will change its name, despite the public supporting its retention.

In a statement on Monday, Colston’s Board of Governors said that the decision was taken “following an extensive period of consultation and reflection” on the school’s name. It also said that the school carried the name of founder Edward Colston for over 300 years not “to glorify or celebrate the man,” but simply because the wealthy merchant “paid for the school to be established.” 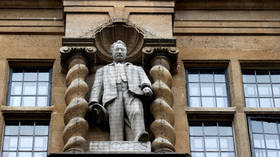 “This school was not named after Colston, rather it was named by Colston,” they said. They added that the BLM protests had made it clear that Colston’s name became “a symbol of the city’s extensive links to slavery,” which made it impossible for a diverse and inclusive school to continue bearing it.

A bronze statue of English merchant Colston, whose ships transported tens of thousands of African slaves to the Caribbean and America in the 17th and 18th centuries, was dumped in Bristol Harbor on June 7, 2020, during BLM protests. It was later recovered by Bristol City Council and moved to a museum.

A year after the statue was toppled, the school launched a survey on the naming issue. Though most members of the public who took part voiced their support for retaining the name, the school authorities chose to listen to current and recent students and staff, who “were more inclined to see a change in the name as a positive step.”

That decision, according to the statement, should make the name “relevant for the pupils and staff of today and tomorrow.” The new name will be announced next summer.