The Science Museum in London has agreed to alter an exhibit on human biology and sex characteristics after receiving complaints over a perceived lack of transgender representation and its “non-inclusive narrative.”

Museum authorities confirmed that the exhibit, titled ‘Boy or Girl?’, is currently under review to “take into account new scientific and curatorial research and visitor feedback.” The exhibit apparently covers subjects such as hormones and chromosomes and asks, “How are boys and girls different?”

According to internal documents reviewed by The Telegraph, the museum was taking “action to consult the Museum of Transology” about the display. This Brighton-based exhibition bills itself as the UK’s “most significant collection of objects representing trans, non-binary and intersex people’s lives.” 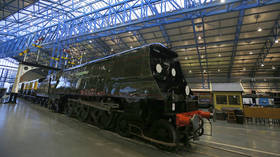 The move to “update [the] non-inclusive narrative” follows complaints noted in internal emails about the “lack of mention of transgender” people. However, the paper states that the display already accounts for topical gender-related issues like dealing with feelings of being “born in the wrong body.”

Currently, the display apparently includes an information panel which states that “sex usually refers to someone’s biological characteristics,” while “gender is more difficult to define.” It also describes a person’s “gender identity” as “our sense of yourself as male or female, or, for some people, neither or both. It may not match your biological sex.”

The exhibit reportedly includes a fake penis to be worn under clothing as a “packer” in order to project a male appearance, as well as a compression vest used to flatten the chest. It also features testosterone patches, which are typically used to regulate changes caused by the male hormone in the body.

According to The Telegraph, the exhibit, which is housed in the museum’s ‘Who Am I?’ gallery, had previously been modified in 2016 after complaints about a sign that stated how “your X and Y chromosomes define your biological sex.”

Although no physical alterations have yet been made to the display, the museum’s management told the paper that the gallery is updated “on a rolling basis, where resources allow” to incorporate feedback and findings.