The French president has reportedly called British PM Boris Johnson “a clown” and said it was a shame to see such a great country, which France could cooperate with, run by a knucklehead.

According to the weekly satirical newspaper Le Canard Enchaîné, French President Emmanuel Macron made some highly controversial and undiplomatic remarks about British Prime Minister Boris Johnson during a meeting in Zagreb in late November. 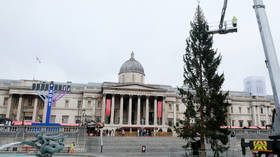 Le Canard Enchaîné claimed on Wednesday that Macron said Johnson is apologetic for the way he acts in public and his stance on fishing licenses for French trawlers and the submarine deal which saw a French manufacturer lose a $40 billion contract with Australia.

“In private, he tells me he’s sorry he acts like he does, conceding he has first and foremost to accommodate public opinion,” Macron stated, adding that Johnson has apparently realised that Brexit is in fact a big mess. According to the journal, Macron points to fuel shortages and empty shelves as evidence, although many people have dismissed Brexit as the cause of the supply chain issues.

Macron apparently described his dealing with the prime minister as “a circus,” noting that they will talk in person, and everything is fine, but then he goes and does something in “an inelegant way.” The comment is seemingly a reference to Johnson’s publication of a letter addressed to Macron on November 25 in which he outlines a plan to deal with the migrant crisis one day after 27 died in a failed English Channel crossing.

Macron concluded that it is “very sad to see a great country, with which we could do a lot of things, led by a clown. A clown or a proud knucklehead? Or both?”

Relations between the UK and France have deteriorated to their worst in decades amid rows over Brexit, fishing and the AUKUS submarine pact.

France reacted to Johnson’s publicized letter last week by withdrawing an invitation to Home Secretary Priti Patel, who was due to meet with her French counterpart in Calais to discuss the migrant crisis. The French move was criticized for being counterproductive.