The Christmas tree in Trafalgar Square, an annual gift from Norway to the UK, has raised eyebrows this year with its rather shabby appearance, prompting some to ask whether Britain has offended the Nordic nation.

This week, Norway’s annual gift of a Nordic Spruce arrived in London’s Trafalgar Square. However, once placed in a central plaza in front of the National Gallery, the 80-year-old spruce appeared scrawny and neglected, with one side looking a lot fuller than the other. 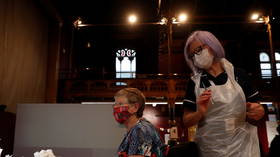 The Christmas tree, an annual present from Norway to the people of London for their assistance during the Second World War, is perhaps the capital’s most prominent festive decoration, and its installation traditionally marks the capital’s countdown to Christmas Day.

The arrival of the tree has provoked the ire of many, while some have taken to social media to mock Norway’s contribution to London’s festive décor.

Some people asked whether Britain had offended Norway or joked if they were at war with them, after Oslo’s less than impressive 24-ft gift. “Have we fallen out with Norway ?!” one person asked. Presenter Julia Hartley-Brewer asked, “Does anyone know what happened to the rest of it?” directing her question to Norway’s diplomatic mission to the UK.

Radio presenter Toby Tarrant joked that “Norway has not taken the sacking of Ole Gunnar Solskjaer well,” a reference to the recently departed Manchester United manager.

Some people said it looked like they had used last year’s tree, while others asked if it had been sitting in a truck for two weeks after being held up at customs.

“Was the London Christmas tree delivered from Norway by Hermes?” one person asked, in a joke that was echoed by others, referencing the delivery firm occasionally accused of a heavy-handed approach to transporting packages.

Another person claimed they were present when the tree was felled two weeks ago and shared a photo. They claimed the two-week journey probably caused it to look a little lopsided.

Despite being one of the most prominent trees in London for the Christmas period, it is certainly not the capital’s finest. On Thursday evening, the tree’s lights will be switched on.

The account of the tree reacted, saying it is now one of the most famous Christmas trees.