The British prime minister has said that the UK is aiming to offer Covid-19 booster shots to the entire population before the end of January, noting that the armed forces will be aiding healthcare workers with the rollout.

“The target that we have set ourselves is to offer a booster to everyone eligible by the end of January,” Johnson said at a government press conference on Tuesday. “As with the first jabs, we will be working through people by age group,” he added.

Johnson also said that the British armed forces would be involved in the administration of vaccines. The government had previously vowed to bolster the booster campaign in light of the spread of the Omicron variant of the virus, which appears to have a significant number of mutations. 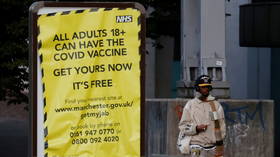 Earlier on Tuesday, the prime minister said it was overwhelmingly likely that the booster shots would provide the required protection against the Omicron variant. Moderna Chief Executive Stephane Bancel had claimed on Monday that Omicron could cause a “material drop” in vaccine effectiveness, sending shockwaves through the stock market.

On Monday, the UK’s Joint Committee on Vaccination and Immunisation said that all adults would shortly be able to receive their booster shot. The booster campaign is currently only open to those aged above 40.

To date, the UK has only rolled out the mRNA vaccines as booster shots. The Novavax shot, which is awaiting approval, may also be used as a booster jab.