The Prince of Wales’ office has branded claims that the heir to the British throne had speculated about his future grandchildren’s skin color as “fiction”. 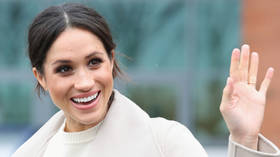 The Prince’s daughter-in-law Meghan Markle, whose mother is a black American, claimed during a bombshell interview with US chat-show host Oprah Winfrey in March that concerns about how dark her children’s skin would be had been raised by a member of the Royal Family. She refused to reveal their name, but Winfrey later confirmed it was neither the Queen nor her husband, Prince Philip.

According to Christopher Andersen’s book ‘Brothers and Wives: Inside the Private Lives of William, Kate, Harry and Meghan’, which will hit the shelves on November 30, the relative in question was Prince Charles.

The tabloid website New York Post Page Six teased readers with pre-publication excerpts and a commentary: “‘I wonder what the children will look like?’ the prince asked his wife soon after the engagement announcement of his son Prince Harry and Meghan Markle. After his wife Camilla answered that they would be ‘absolutely gorgeous’, Charles, according to Andersen’s ‘well-placed source’, further clarified his question by saying, ‘I mean, what do you think their children’s complexion might be?’”

Clarence House has denied these claims, issuing a single-line statement: “This is fiction and not worth further comment.”

According to The Sun, the Royal Family’s lawyers have been alerted over the claims.

Prince Harry and his spouse stepped down as senior royals in January 2020, citing a need for privacy as one of the main reasons for their decision. Since then, however, they have signed deals with Netflix and Spotify, and shared sometimes outspoken views on their life as royals, on their relatives’ attitude towards them and even on politics.