Scottish authorities confirmed six cases of the Omicron Covid strain on Monday, as the scale of the outbreak grows in the UK despite the government reintroducing domestic and travel restrictions to reduce the risk posed.

Speaking on Monday, Scotland’s health secretary, Humza Yousaf, admitted that this is a “worrying time for the six people now identified as having the new variant.” To limit the risk of the strain spreading, Public Health Scotland “will undertake enhanced contact tracing” of all confirmed cases.

The new infections in Scotland follow confirmation from UK officials that three individuals have tested positive for the new variant in England, including one who visited Westminster in the country’s capital. 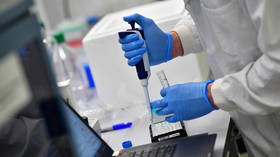 The UK government reintroduced Covid restrictions in England on Friday, with Northern Ireland, Scotland, and Wales taking similar steps to help reduce the threat posed by the Omicron strain. For the next three weeks, face masks will be mandatory in shops and on public transport. The Department for Education has advised all school-aged children in Year 7 and above, as well as staff and visitors, to wear face coverings in communal areas.

Despite claiming the Scottish government is doing everything possible to tackle the new variant, Yousaf admitted that “until more is known we must be cautious,” warning that further Covid restrictions could be reintroduced.

The Omicron variant, which UK officials have dubbed the “worst-ever” strain, has sparked international panic, as countries rush to impose restrictions domestically and internationally to limit its impact. The World Health Organization has admitted that the new strain shows a “number of worrying mutations,” which could allow it to evade the resistance provided by vaccines.