The UK’s Covid genomics chief, Professor Sharon Peacock, has warned that it’s only a matter of time before the newly mutated “worst-ever” strain reaches the country, but that officials can buy some time to prepare.

Speaking to reporters on Friday, Peacock highlighted how the ‘Omicron’ variant is “likely to be transmitted into the UK at some point” due to the virulent nature of the strain.

“I think buying time is important and it’s worthwhile, because we can find out what we need to know about that particular variant,” Peacock said, urging officials to brace for its arrival on British shores. 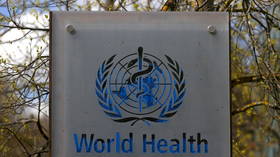 WHO could take ‘weeks’ to understand new Covid strain

In response to the newly detected variant, dubbed by scientists a ‘super-mutant’ strain, a growing number of countries around the world, including the UK, have imposed travel bans on South Africa and neighbouring African countries to reduce the risk of it spreading.

Addressing the situation, the UK Health Security Agency declared the Omicron strain “the worst variant we have seen so far,” while the World Health Organization described it as having a “number of worrying mutations.”

The concern about the impact the variant could have on the UK came as Britain recorded more than 50,000 fresh Covid infections for the first time in a month. Data reported on Friday showed that the UK’s confirmed case numbers have risen 10% in a week, although fatalities are down 15.5%.