A British primary school has removed the names of wartime leader Winston Churchill and ‘Harry Potter’ author JK Rowling from two of its houses, in a bid to make the school more “diverse.” Parents are furious.

Holy Trinity Church of England Primary School in Richmond decided in October to rename two of its pupil houses – named after Winston Churchil and J.K. Rowling – in honor of black footballer Marcus Rashford and nurse Mary Seacole, a heroine of the Crimean War who was also black.

According to the Daily Mail, the school made the change during Black History Month, and parents are furious that they weren’t consulted. 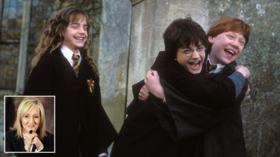 “A lot of us are quite shocked that the school authorities have decided that the contributions of Churchill and Rowling deserve to be erased from the records without so much as a consultation with parents,” one parent told the newspaper. “Presumably this has happened partly due to the supposed thoughtcrimes committed by these two national figures.”

While Churchill’s leadership is credited with saving Britain from Nazi aggression during World War II, his views on race and empire are considered “problematic” by woke activists nowadays. Historians argue that Churchill could have done more to alleviate the 1943 Bengal Famine, and he reportedly described Indians as a “beastly people with a beastly” religion, Islam as “as dangerous in a man as hydrophobia [rabies] in a dog,” and the white race as “a stronger race, a higher-grade race” than the indigenous peoples they colonised in America and Australia.

Rowling’s ‘Harry Potter’ series is loved by readers young and old, but her views on transgender issues have landed her in hot water. Rowling has spoken out against gender-neutral language, arguing that it “erases” the concept of sex and therefore the concept of womanhood. These comments earned her backlash from LGBT groups and most recently saw her passed over by the producers of a TV special commemorating the 20th anniverary of the first ‘Harry Potter’ film.

The school, which educates children aged between three and 11, told the Daily Mail that the changes were made at the request of pupils themselves.

“The changing of our school’s house names was an activity that our children began discussing last year as they did not feel the names reflected the diverse community of our school,” Head Teacher Ms. Bateman told the newspaper. “It is important that childrens’ voices are heard and this is why we supported their choice to have our house names reflect diversity, equality and the environment.”