Thousands of HIV patients in Britain will now be able to get rid of daily pills with a new injectable treatment approved by the National Institute for Health and Care Excellence (NICE) on Thursday. 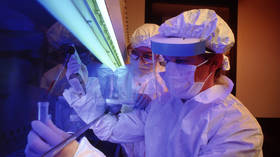 “We’re pleased … to be able to recommend cabotegravir with rilpivirine as a valuable treatment option for people who already have good levels of adherence to daily tablets, but who might prefer an injectable regimen with less frequent dosing,” Meindert Boysen, deputy chief executive and director of the Centre for Health Technology Assessment at health watchdog NICE, said in a statement.

He noted that the new treatment might offer relief for those who suffer side effects from daily pills, but he underlined that “despite scientific advances HIV is still incurable.”

Cabotegravir and rilpivirine will be administered as two separate injections every two months.

According to NICE’s estimate, around 13,000 HIV patients in England will be eligible for the jabs.

The announcement was welcomed by charities and research organisations.

“This is incredible news and will be a great option for many living with HIV,” said HIV and sexual health charity the Terrence Higgins Trust on Twitter.

Dr Jonathan Stoye from the Francis Crick Institute pointed out that taking medicines daily is inconvenient and brings with it the risk of missing doses. “The approval by Nice of a long-acting injectable treatment must therefore be warmly welcomed,” he said as quoted by the British media.

“Brilliant! One of the most significant developments in HIV treatment since the introduction of antiretrovirals in 1996. I would like every patient to be offered injectables and, living with HIV myself, I would be happy to switch or try injectables,” he claimed.