Millions of Amazon customers in the UK have been threatened with having their Visa transactions cut off, as Amazon puts pressure on the e-tailing giant in an effort to reduce the fees Visa collects with every purchase.

Starting January 19, Amazon will no longer accept Visa cards, the company has declared, citing “high fees” as it throws down the gauntlet before one of the largest credit card issuers in the UK. Amazon has its own credit card, which is operated by Mastercard, and other cards – such as American Express or even Visa’s debit cards – will remain usable on the site.

Insisting that the problem is purely Visa’s to fix, a spokesperson for the largest online retail firm in the West said in a statement to the UK Telegraph that the costs of accepting credit card payments “should be going down over time with technological advancements, but instead they continue to stay high or even rise.” 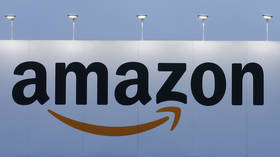 Santa Bezos? Amazon is offering £3,000 to get people to work for them over Xmas – this isn’t festive altruism, it’s a power grab

As a result of Visa’s continued high cost of payments, we regret that Amazon will no longer accept UK-issued Visa credit cards.

Amazon did not share how many customers would be affected by the move, though with a whopping 90% of British shoppers using Amazon, according to research firm Mintel, the clash of the corporate titans looks like it will cause a major upset in the retail sphere – that is, unless one of the two companies caves and abandons their position.

It isn’t just Visa that will be affected – Barclaycard, HSBC, and Vanquis all use Visa’s payment system to process online orders. As the UK adopts certain Brexit-related promises, it will no longer be subject to the European Union’s limit on fees charged by credit card issuers, meaning Visa can jack up its rates any time it pleases.

Visa was “very disappointed” to learn about Amazon’s plans to “restrict consumer choice,” with a spokesman declaring that when such choices are limited, “nobody wins.” The company did not reveal what percentage of Amazon shoppers in Britain use Visa credit cards to make their purchases.