The Church of England has rejected allegations that it helped asylum seekers to ‘game’ the immigration system by converting from Islam to Christianity, claiming it does not allow people to “dodge the law.”

The Church of England came under the spotlight on Tuesday after it was reported that the Liverpool bomb suspect Emad Al Swealmeen converted to Christianity after arriving in the UK from the Middle East.

Addressing the reports, a Home Office source was reportedly quoted as saying that the Liverpool bomber attempted to “game the system” by converting to Christianity.

Home Secretary Priti Patel reiterated this accusation, arguing that illegal immigrants are given opportunities to exploit the “broken” asylum system in the UK in an attempt to remain in the country.

The Church’s spokesperson, Ben Ryan, blasted any suggestion that religious figures are responsible, arguing that it’s not their duty to assess “asylum claims or security implications.”

“The Church takes the Sacrament of baptism extremely seriously. It is not given out just because it is asked for, and never as a means to dodge the law,” Ryan stated.

Al Swealmeen converted to Christianity at a ceremony in Liverpool in 2017, according to an evangelical couple, Elizabeth and Malcolm Hitchcott, who housed him for eight months.

The home secretary is planning to push forward with a proposal to overhaul the asylum system to prevent individuals from using the “merry-go-round” of appeals “at the expense of the taxpayers”. 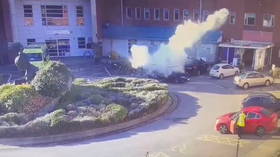 Al Swealmeen was refused permission to remain in the UK after filing an asylum claim back in 2014. According to the Upper Tribunal of the Immigration and Asylum Chamber, which handles appeals, Al Swealmeen had lodged an initial appeal but that too was rejected. It is not known if he had sought any other methods to remain or if the Home Office had informed him he was due to be removed from the UK.

Britain’s counterterrorism police are leading an investigation into an explosion outside Liverpool Women’s Hospital on Sunday, when an IED exploded in a taxi, killing Al Swealmeen and injuring the driver of the vehicle. Authorities haven’t said what they believe motivated the attempted attack