Emad Al Swealmeen, who was the only victim of his suicide bombing outside a Liverpool hospital on Sunday, had been planning the attack for months, investigators believe.

Speaking to the media on Wednesday, Assistant Chief Constable Russ Jackson confirmed that Emad Al Swealmeen was a failed asylum seeker who was born in Iraq; earlier reports suggested he may have been a Jordanian national. 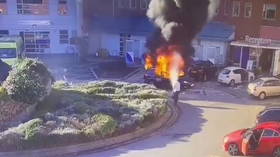 “We have now traced a next of kin for Al Swealmeen who has informed us that he was born in Iraq,” the constable stated.

Jackson said that Al Swealmeen had moved into a rented property in Liverpool seven months ago, and investigators believe he had started making relevant purchases for creating a bomb at that time, or earlier.

“A complex picture is emerging over the purchases of the component parts of the device; we know that Al Swealmeen rented the property from April this year and we believe relevant purchases have been made at least since that time,” press were told.

The Iraqi-born bomber had built his explosive device at a rented flat in the Sefton Park area of the city.The police stated that Al Swealmeen had gone through periods of mental breakdown and that this would play a part in the investigation.

A post-mortem confirmed that he died from injuries caused by the explosion.

The bomber had jumped into a taxi on Sunday morning, asking to be taken to a remembrance parade and then the city centre. With roads closed and streets blocked, he eventually asked to be taken to the women’s hospital.It is believed that the taxi driver locked him in the car. It is also understood that the bomb did not detonate as intended. The taxi driver escaped with minor injuries.