The UK has jailed nine Insulate Britain eco-warriors guilty of breaching an injunction banning them from road blockades, after they vowed to keep up the disruptive demonstrations.

On Wednesday, six demonstrators were given four-month jail sentences, two got three months and a final defendant was given a six-month term; all nine were aged between 20 and 58. The eco-warriors were convicted of contempt of court for violating an injunction meant to prevent them from blocking busy roads. 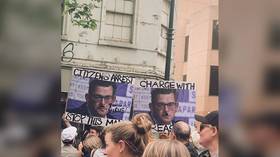 Ben Taylor got the longest sentence after a submission to the court which was described as “inflammatory” and a “call to arms.”

The judge said there was no alternative other than custodial sentences given their admission that they wish to continue flouting the law.

“The right thing to do is to highlight the injustice, breaking the law if needed,” a spokesperson for the organization stated, likening their plight to that of the suffragettes and Martin Luther King.

The government responded by getting a court injunction, preventing road blockades.

“I’ll continue to do all I can to protect road-users and prevent dangerous, disruptive behaviour,” Transport Minister Grant Shapps said in a tweet, following the sentencing.