The UK and its allies are at a greater risk of a military conflict with Moscow now than they ever were during the Cold War, the chief of the Defence Staff said, adding that “traditional diplomatic mechanisms” are no longer there.

The emergence of a “multipolar world” from the ashes of the bipolar international system of the Cold War has led to greater competition between nations, which can easily see the UK as well as other western states and Russia pitted against each other, General Sir Nick Carter told The Times Radio on Saturday.

“We’re in a much more competitive world than we were even ten or 15 years ago,” the four-star general said, adding that “the nature of the competition between states and great powers leads to greater tensions.” 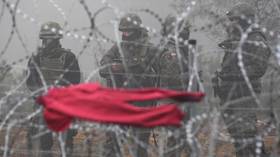 The general then warned politicians that the belligerent “nature” of some of their policies could lead to a situation in which “escalation leads to miscalculation.” At the same time, he accused the Kremlin of being ready to go to any lengths to supposedly undermine western-European nations and the US.

Carter, 62, sounded somewhat nostalgic for the Cold War times as he said that “many of the traditional diplomatic tools and mechanisms that you and I grew up with in the Cold War” are “no longer there.” He also called the present-day situation a “real challenge we are confronted with,” adding that, without those Cold War-type mechanisms, there is “a greater risk.”

The general said he believes that the risk of war with Russia was greater now than at any moment of his 44-year-long career and called on the UK to be “careful.” His words came as the Ministry of Defence confirmed that a team of British soldiers were sent to Poland to explore how they could provide “engineering support” to Warsaw amid a migrant crisis on its eastern border with Belarus.

Earlier, Polish Defense Minister Mariusz Błaszczak confirmed that NATO nations, including the UK, would help his country to prevent migrants from crossing into Polish territory. The British troops in particular were expected to construct a fortified border wall there.

The EU was quick to blame the crisis on Minsk’s “hybrid war” as it accused Belarus of encouraging migrants to attempt a new route into Western Europe through its territory. Belarusian President Alexander Lukashenko denies the accusations and said that his government was no longer prepared to help the EU prevent migrants from entering Poland.

Some western officials also rushed to blame the situation on Russia. Moscow responded by saying it had nothing to do with the crisis.