A group of 11 climate change protesters were arrested in England on Wednesday after gluing themselves to a road in an effort to block traffic – the seventh time they have taken such action.

The activists from Insulate Britain – a splinter group of Extinction Rebellion which demands better insulation in homes to reduce climate change – shut down a roundabout at a junction with the M25 London Orbital Motorway in Swanley, Kent before police arrested them.

INSULATE BRITAIN RETURN TO THE M25 FOR 7TH TIME TIMEAt 7:30 J3 M25, 11 people sat down in the road, pouring oil and gluing their hands to the tarmac, to demand the Government end fuel poverty by insulating Britain’s homes, starting with social housing, by 2030 @10DowningStreetpic.twitter.com/mecoWyaU3m

Though it was soon shut down, the protest caused road delays and “a backlog of traffic” as Brits attempted to commute to work, according to Kent Police. 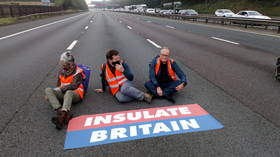 It was the seventh road protest by the group, and the second since a High Court injunction warned Insulate Britain that they could be imprisoned or fined if such a demonstration took place again.

The activists were undeterred, however, with a spokesperson saying, “We are going nowhere. You can raid our savings. You can confiscate our property. You can deny us our liberty and put us behind bars. But shooting the messenger can never destroy the message.”

That message, according to the spokesperson, is “that this country is going to hell unless you take emergency action to stop putting carbon into the air.”

In a statement, Insulate Britain demanded that the government “end fuel poverty by insulating Britain’s homes, starting with social housing, by 2030.”

The UK government, on the other hand, has defended its existing insulation policies, noting that it is “investing £1.3 billion this year alone to support people to install energy efficiency measures.”

Transport Secretary Grant Shapps has previously condemned the climate activism group, arguing that although “everyone is entitled to protest,” that “doesn’t extend to closing roads and ruining livelihoods.”

Also on rt.com
Insulate Britain activist storms off Good Morning Britain after revelation that he hasn’t insulated his own home (VIDEO)