“Misogynists” and “very woke” women spewing vitriol at MP Rosie Duffield have forced her to skip a party conference and made the House of Commons speaker take an “unprecedented intervention” on her behalf.

“Parliamentarians, who have been elected to speak up for their constituents, should be able to attend their own party conference without fear of harm,” Sir Lindsay Hoyle said on Saturday during a gathering of G7 parliament members.

Too many people have been targeted for their opinion or the office they hold. In order to protect democracy, we need to ensure those participating can do so without threats of intimidation.

The public call came in response to a decision by Duffield not to attend a Labour conference this week, according to The Times on Sunday, which described it as an “unprecedented intervention.” The MP said she was advised that going there was “not a good idea,” though the report doesn’t makes it clear who said that. She discussed her personal security with Speaker Hoyle, chief Labour whip Alan Campbell and Kent police, the newspaper said. The MP represents the constituency of Canterbury in Kent.

Duffield, who chairs the Women’s Parliamentary Labour Party, has drawn much criticism from pro-trans rights activists due to her opposition to unquestionably giving trans women access to women-only places like lavatories, shelters or prisons. She believes biological males, regardless of gender identity, should not intrude into women’s safe spaces.

Earlier in September, she posted a thread on her Twitter account, defending her position and complaining about aggressive reactions to it. It was a response to a report in a local publication about an openly gay Tory council member in Canterbury, Ben Fitter-Harding, who said Duffield was inflicting “such pain upon” the city’s “LGBTQ+ community” that “many of us find hard to bear.”

That is misogyny. Some angry strangers, none of whom have ever met me, have decided what I believe and that it is 'transphobic', which seems to others piling on to be the worst of all possible crimes. My sins? To agree that male-bodied people should not be included in lists…

Earlier she was dragged through mud and branded a transphobe for being among some 55,500 people who ‘liked’ a 2020 tweet by TV host Piers Morgan, which mocked CNN for giving health advice to “individuals with a cervix.” Her own party’s LGBT+ group “now seem to hate my guts,” she told The Sunday Times. 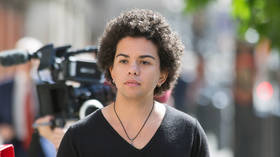 The report leaves it to the imagination how credible a threat to Duffield’s safety her online haters pose. She personally doesn’t seem to think she could have been met with violence at the Labour event.

“I mainly took the decision not because I really thought I was going to be attacked, but because I did not want to be the centre of attention,” she explained. “We have had Labour MPs who have had to have security at conference over the past few years, and I didn’t want that sort of attention or to become the story.”

She also seems to be doubtful that the angry comments, which she said made her “exhausted” and on occasion “frightened,” were coming from left-wing radicals, contrary to what the newspaper said.

“There are some women who get involved and want to be seen to be very woke,” she said, “but mostly it is men, and the same men that have trolled me ever since I got elected.” Her detractors are motivated by misogyny, Duffield believes, and simply “latch on to” whatever excuse they find to attack her, she said.

Bringing up personal safety seems to have somewhat turned the tide for Duffield. After the story was published, LGBT+ Labour expressed staunch support for her despite her stance on trans rights. “Women in politics are subject to appalling levels of abuse and we are clear it has no place in our party or society,” it said in a statement.