The UK’s chief medical officers have ruled that children in the UK between the ages of 12 and 15 should be able to get vaccinated against Covid-19, despite criticism of the idea.

The Chief Medical Officer for England Chris Whitty said on Monday that child vaccination will be a “useful tool to reduce the disruption” in schools. 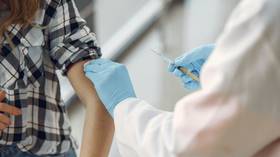 READ MORE: We need open and honest discussion about the pros and cons of vaccine mandates, not the hysterical shouting match we have now

Children will be eligible at this moment in time for one dose of Pfizer’s Covid-19 vaccine and rollouts are expected to take place imminently.

The decision on whether to vaccinate children was deferred to the chief medical officers after the Joint Committee on Vaccinations and Immunisation (JCVI) declined to advise that those under the age of 16 be vaccinated earlier this month.

In its decision, the JCVI declared that though “the health benefits from vaccination are marginally greater than the potential known harms…the margin of benefit is considered too small to support universal vaccination of healthy 12 to 15 year olds at this time.”

The government, however, has consistently sought to rollout Covid-19 vaccination for children.

Professor Dame Sarah Gilbert, the designer of AstraZeneca’s vaccine, has publicly opposed vaccinating children and giving the majority of Brits booster jabs, arguing that surplus vaccine doses should be sent to countries in need to fight the virus globally.

In July, Professor Gilbert told La Repubblica, “If you can’t prevent transmission by vaccination and the children are not at risk of severe disease and hospitalisation and death, which the vast majority of children are not, you have to ask yourself: ‘What would be the benefits of vaccinating children?’”

Also on rt.com
AstraZeneca vaccine designer says Covid boosters are unnecessary for most people & should be sent to countries in need instead

Last week, School Standards Minister Nick Gibb said that children would be vaccinated at school if the scheme was approved, calling it the “swiftest and most efficient” way and adding that parental permission would “always be sought.”

Covid-19 Vaccine Deployment Minister Nadhim Zahawi, however, has said that children would still be able to get vaccinated if their parents oppose the idea. “What you essentially do is make sure that the clinicians discuss this with the parents, with the teenager, and if they are then deemed to be able to make a decision that is competent, then that decision will go in the favour of what the teenager decides to do,” Zahawi told Times Radio this month, confirming that children could overrule their parents if they are “competent to make that decision.”