Over 50% of Covid patients in England tested positive only after being hospitalised – likely for other reasons – leaked NHS data has suggested, raising questions about the true impact the virus is having on the healthcare system.

The previously hidden figures, covering all NHS trusts in England, showed that as of last week, only 44% of those classified as Covid patients had tested positive for the virus by the time they were admitted to hospital. Despite broad public testing for the disease, an incredible 56% of Covid hospitalisations involve already-admitted patients who were administered routine Covid tests, the Telegraph reported. Forty-three percent of Covid-positive patients were identified within two days of admission, while 13% were flagged in the following days and weeks. 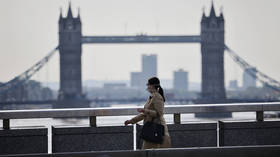 Britain has a choice on Freedom Day: Embrace liberty or slide into total biosecurity tyranny

According to the outlet, health officials were instructed last month to begin placing Covid patients into two categories: those who were in hospital primarily because of the virus, and those who were admitted for other reasons. However, the NHS has so far withheld this data from the public.

With the majority of Covid patients being diagnosed after admission – in some cases weeks later – the leaked data points to the possibility that the virus may only have a minor or negligible role in many hospitalisations blamed on coronavirus.

The leaked figures also suggest that a large number of Covid hospitalisations are the result of nosocomial transmission, meaning that healthcare facilities – rather than restaurants, stadiums, schools, or other public venues – may be driving up infections requiring medical care.

Ultimately, the NHS leak indicates that many Covid patients are actually in hospital for non-Covid reasons, especially when one considers the widespread and regular use of PCR tests, Professor Carl Heneghan, director of the Centre for Evidence-Based Medicine at the University of Oxford, told the Telegraph.

“When people hear about hospitalisations with Covid, they will assume that Covid is the likely cause, but this data shows something quite different – this is about Covid being detected after tests were looking for it,” he said, adding that the current data being fed to the public could lead to “false conclusions” and exaggerate the virus’ actual impact on the NHS.

Heneghan described the leaked figures as “incredibly important” and urged the government to stop withholding such data.

Tory MP Graham Brady issued a similar call for greater transparency, noting that even after 18 months of the health crisis, the government has failed to make detailed information about hospital admissions publicly available on a regular basis.

Also on rt.com
People jabbed with PLACEBOS during vaccine trials will have same privileges as those who are ‘fully’ vaxxed, UK minister says

Brady’s colleague, Conservative MP Greg Clark, said that he would write to Health Secretary Sajid Javid and urge him to be more forthcoming with hospital data. The lawmaker noted that the accuracy of such information was vital, seeing as it is used to determine “how quickly restrictions should be lifted.”

He added that there is a “big distinction” between people admitted solely for Covid and those who are in hospital for something else but “have Covid in such a mild form that it was not the cause of their hospitalisation.”

An NHS data expert who spoke with the Telegraph said that the government’s published statistics were “despicable” because they do not provide a “true picture” of how Covid is affecting public health.

An NHS spokesperson insisted that many patients are admitted with symptoms linked to the virus, and are later confirmed Covid cases upon receiving a post-admission test. Other patients in hospital may have “presymptomatic or asymptomatic” cases, the spokesman said.

Recent news reports have been highlighting renewed pressure on the NHS, with Downing Street suggesting that the decision to lift many Covid restrictions earlier this month has led to an uptick in cases.

However, even senior health officials appear to admit that the issue cannot be blamed on Covid alone. A letter from NHS hospital trusts to the government warned that a “massive backlog” of patients in need of care, as well as a large number of medical staff ordered to self-isolate or on annual leave, was exacerbating the crisis. In April it was reported that 4.7 million were waiting for operations and procedures in England, after the NHS stopped offering routine care in order to focus on Covid patients.