23-year-old Lewis Hughes has been charged with assault and is scheduled to appear in court later this month after a viral video showed him and a friend harassing England’s Chief Medical Officer Chris Whitty.

The east London man is set to appear in court on July 30th after being charged on Thursday evening over the incident, which was widely condemned by politicians from all major parties. 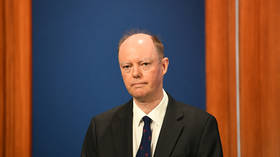 Hughes and his friend Jonathan Chew, 24, recorded themselves grabbing and harassing a frightened and uncomfortable looking Whitty as he walked through London’s St. James Park on Sunday.

The video showed Whitty repeatedly trying to pull away from the two men as they ran after him, grabbing at his body and jeering.
Hughes and Chew had reportedly spotted Whitty – one of the UK’s most recognisable Covid-19 response figures – after attending an anti-vaccination march in the area.

It was reported that Hughes had been fired from his job as an estate agent this week after Prime Minister Boris Johnson condemned the “despicable harassment” from the two “thugs.”

Though Hughes apologised on Thursday “for any upset” he may have caused, he attempted to defend himself by noting that Whitty had not explicitly said “get off me” despite his obvious attempts to escape.

“If he had said that and I had realised how he felt, I wouldn’t have put my arm round him,” Hughes said to the Sun newspaper, claiming that he “just wanted a selfie” and there “was no malicious intent.”

Hughes also complained about the prime minister calling him a “thug,” saying he felt “very let down by Boris,” who he had voted for in the last general election.

Chew – who has not been charged for his part in the incident – also attempted to defend himself by stating he has autism and ADHD, which impaired his thought process.

It was not the first time Whitty had been harassed in public since the start of the Covid-19 pandemic. In February, a teenager was publicly condemned for filming Whitty on the street and calling him a “liar.”