A pesticide that has been partially banned by the European Union and blamed for decimating bee populations is expected to receive approval for use in Scottish salmon farms, according to reports.

The Scottish fish farming industry plans to deploy imidacloprid, an insecticide, in order to kill sea lice that can fester among caged salmon. The chemical is used in a “water filtration” system developed by fish farm biotech company Benchmark, which is reportedly seeking to trial its CleanTreat product in Scotland.

The system is designed to remove chemicals from fish farm treatment water, but its use of imidacloprid raises serious red flags.

According to US government scientists, imidacloprid is “very toxic to aquatic life with long lasting effects.” And earlier this month, the European Union’s top court upheld the bloc’s partial ban on three insecticides, which are developed by Bayer CropScience. Restrictions were placed on the use of the chemical in 2013 after it was determined that imidacloprid was harming bee colonies.

Despite the issues associated with the chemical, the Scottish government is reportedly paving the way for its use in salmon farms. In emails first revealed by investigative news outlet The Ferret, officials express willingness to help CleanTreat clear environmental regulations so that it can be cleared for approval.

In one message, Annabel Turpie, director of Marine Scotland, the Scottish government agency that manages fisheries, made reference to offering “support” to help Benchmark “navigate CleanTreat through the system.” She added that there was an expectation that CleanTreat would begin tests at a fish farm assuming that it received the regulatory greenlight.

The initiative already has experts worried. A professor of biology at the University of Sussex, Dave Goulson, told the Guardian that imidacloprid was “incredibly toxic to insects and other invertebrates.” He said that it only takes “a billionth of a gram to harm aquatic life,” meaning that even tiny traces of the chemical have a serious impact on marine life. The CleanTreat system claims to filter imidacloprid from water, but the professor said that samples need to be tested at an independent laboratory. 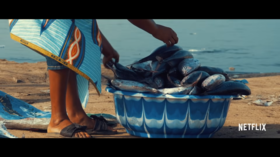 READ MORE: Seaspiracy? Netflix’s new anti-fishing film that’s being lauded by celebrities has got more holes in it than a trawler’s net

A spokesperson for the Scottish government insisted that all aquaculture farms are regulated and must meet “strict guidelines to ensure the environmental effects are assessed and managed safely,” adding that the government was committed to promoting economic innovation across all sectors, including fish farming.

Benchmark said in a statement that CleanTreat is “an award-winning and validated water-purification system” and claimed that its sea-lice solution which contains imidacloprid is currently used in Norway but that there are no trials for it in Scotland.

lyrics https://lyrics.az/?new_a=mixedsearch2&keyword=Xxxtentecion look at me