A number of climate activists have been arrested by London police after the Extinction Rebellion group held an early morning protest at the headquarters of Barclays Bank, Europe’s largest financier of the fossil fuel industry.

Early on Wednesday morning, seven climate activists from Extinction Rebellion took hammers and chisels, adorned with personal messages including “For My Grandson,” to the glass front of Barclays HQ in the Canary Wharf business district, East London.

The activists carried placards reading “Better Broken Windows than Broken Promises” and pasted posters with the message “In Case of Climate Emergency Break Glass” on the building’s damaged glass front.

On 7th of April, at 7am, 7 women from #ExtinctionRebellion carefully broke glass @BarclaysUK HQ in Canary Wharf, to call on the bank to stop financing the #ClimateCrisis. The group wore suffrage movement colours, and patches saying 'better broken windows than broken promises'. pic.twitter.com/YMGdCGfrdZ

One activist, Anne, 63, a grandmother from Dorset, was quoted on the Extinction Rebellion Twitter page saying: “I want to ask the CEO of Barclays, James Staley, who I understand is also in his 60s, to stop funding climate breakdown. I want to be able to say to my grandson that, I am trying to give him a chance to live a safe and full life.”

Photographs taken at the scene show police arriving and making several arrests. People were taken away in police vans. 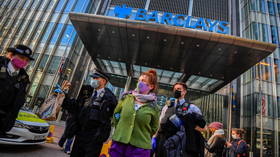 Extinction Rebellion has launched a renewed campaign against the finance industry. In late March, the group’s cofounder, Dr. Gail Bradbrook, was recorded using a hammer and chisel to disable a bank’s ATM. The caption on the footage read, “Broken windows, not broken futures.”

Barclays has come under increasing pressure in recent years to reverse its financing of fossil fuel industries with shareholders recently tabling a resolution calling for the bank’s exposure to coal, oil and gas to fall in line with the Paris Agreement’s climate goals. The firm is Europe’s largest fossil fuel financier.

Last year, 24% of Barclays shareholders voiced their dissent at the company’s support for fossil fuels.