Over a dozen environmental activists from the HS2 Rebellion group have built and occupied a tunnel network under Euston Square Gardens in London in a bid to halt a proposed high-speed rail development.

The eco warriors claim the green space outside the busy Euston terminus, will be sold off and turned into a temporary taxi rank before eventually forming part of the HS2 (High Speed 2) railway development. 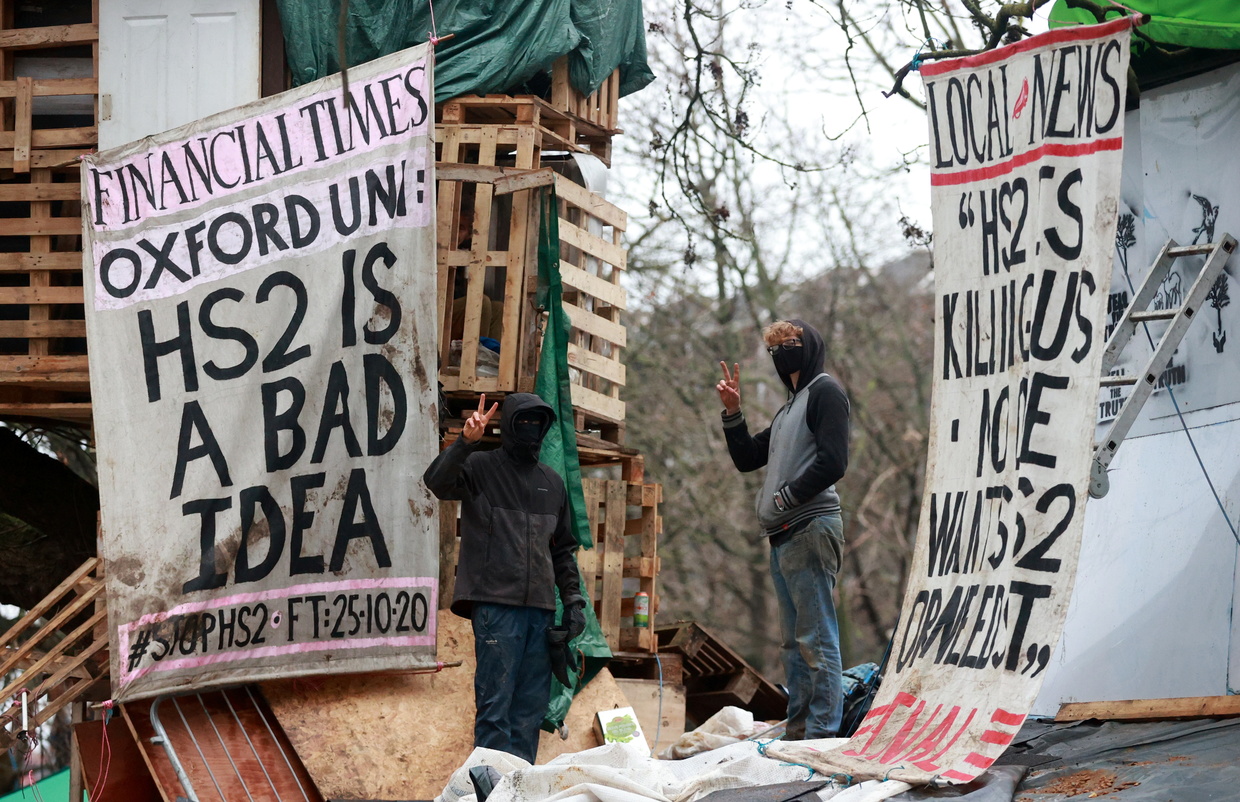 Activists gesture next to signs at a makeshift camp, as others occupy tunnels under Euston Square Gardens. © REUTERS/Hannah McKay

They have been camped out in the park for weeks, but early on Wednesday morning, bailiffs arrived to evict them. However, the activists had spent several weeks preparing for the eviction.

As the #HS2 eviction of the #StopHS2 campaigners began this morning, Dr Larch Maxey had a video update from Euston Square Gardens #London#HS2Rebellion@XRebellionUK .@stophs2pic.twitter.com/wJhtHdL2Bv

Using shovels, pick axes and buckets, they had secretly excavated an estimated 30m (100ft) of tunnels, repurposing the soil to fortify barricades at the entrance to their encampment as well as insulate their “pallet fortress” nicknamed ‘Buckingham Pallets’.

@Hs2Rebellion activists bunker down early this morning in the ‘shaft’ just as the eviction started. @XRebellionUK@XRLondon#ExtinctionRebellion@guardian@BBCBreaking@itvnews@ReutersUK@DailyMailUK@Telegraph@Independent@LBC@RobGMacfarlane@ChrisGPackham#ActNowpic.twitter.com/4nvhnidPft

The group claims up to 17 so-called “tree protectors” are willing to occupy the tunnel network, code-named ‘Calvin’, and remain underground “for as long as it takes to stop HS2”.

The tunnels are reinforced with wooden beams and flooring to prevent collapse, and are reportedly stocked with provisions, including food and water.

#HS2 in breach of health and safety? Chopping down our air supply endangers everyones health and well being! All for a temp taxi rank?? Yeah right! #hiddenagenda#spend106BILLIONBETTERpic.twitter.com/CiyDXL3Nok

The proposed £106 billion high-speed rail project, once completed, will link up London, the Midlands, the North of England and Scotland. Activists claim the project would desecrate 108 ancient woodlands, and is what they have dubbed an “expensive, unpopular and destructive” scheme that would result in “countless people being forced from their homes and businesses”

Also on rt.com
LISTEN to the sound of protest: pianist turns tense standoff between eco-activists & police in Germany into concert

HS2 claims only 42 ancient woodlands would be affected and that 80 percent of their total area would remain intact. Construction is due to begin in January and run until December, though it remains to be seen how long the activists can remain holed up in the tunnel.