A philosophy professor who was honoured by the British government for her advocacy for academic freedom has scoffed at her critics after being targeted by an open letter accusing her of transphobia.

Kathleen Stock, a professor of philosophy at the University of Sussex, was made an Officer of the Order of the British Empire (OBE) for her services to higher education as part of the UK government’s annual ‘New Year Honours’. 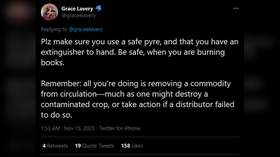 UC Berkeley professor calls for ‘transphobic’ book to be BURNED & replaced with ‘own propaganda,’ later claims it was a ‘joke’

The citation for the award commended her for her “defense of free speech” and commitment to academic freedom.

Stock has been a vocal critic of many initiatives promoted by transgender activists. She opposed amendments to the UK’s 2004 Gender Recognition Act, which would have allowed people to choose more easily a legally-recognised gender without the need for formal medical certification. The professor dismissed the idea, arguing that it would undermine efforts to overcome “female-based oppression.”

In 2018 she said in an interview that trans women should not be allowed in female bathrooms and other gender-specific areas, noting that many of them are “still males with male genitalia” and are “sexually attracted to females.”

However, she insisted that she was not transphobic and stressed that trans women should be “free of violence and discrimination.”

More recently, the philosophy professor has criticised how transgender issues are discussed in academia. She said that she wanted to use her OBE award to highlight how LGBT charity Stonewall is a threat to freedom of speech and that the organisation had partnered with universities to silence open debate about trans issues.

Perhaps unsurprisingly, it wasn’t long before Stock found herself in the crosshairs of transgender activists. In an open letter signed by over 600 academics, the professor was denounced for her “trans-exclusionary public and academic discourse on sex and gender.” The document went on to accuse the British government of “mistak[ing] transphobic fearmongering for valuable scholarship” and stressed that the signatories “stand against prominent members of our profession using their academic status to further gender oppression.”

The letter has received support from around the world, with the original signatories hailing from a range of prestigious institutions, including the London School of Economics, Massachusetts Institute of Technology, and Georgetown University.

In a series of tweets, Stock shrugged off the academic protest and vowed to never stop challenging the central tenets of trans activism.

“I won’t be stopping, and neither will the thousands of others who are now galvanising to examine the cost of pretending – not just at an understandable personal level, but also at an institutional and policy and educational level – that people can change sex,” she wrote.

I won't be stopping, and neither will the thousands of others who are now galvanising to examine the cost of pretending- not just at an understandable personal level, but also at an institutional and policy and educational level – that people can change sex. End.

Stock also pointed out that the letter actually misrepresented her position on the Gender Recognition Act. The letter’s authors later acknowledged the error.

The professor is hardly the first public intellectual to take heat from academics for her unpopular views on trans issues. In November, Grace Lavery, an associate professor of English at UC Berkeley, encouraged her Twitter followers to steal and burn copies of ‘Irreversible Damage: The Transgender Craze Seducing Our Daughters’ by Abigail Shrier. The book has faced censorship and has been branded transphobic for its opposition to transgender treatment for young girls. Lavery, who admitted that she’s never actually read the book, later insisted that she was joking.